This is a previously published article from my older blog thinkingaboutpainting.blogspot.com
Carolus-Duran was the progressive painting instructor in Paris with whom Sargent chose to study.
His teaching diverged greatly from other painters of that time because of the emphasis on color and form, created with direct and painterly brushwork, with inspiration from past master Velasquez.
This method of painting was very different than the academic norm at the time, which emphasized smooth blending.
Sargent's facility with a brush is almost universally admired among oil painters and an examination of how he achieved such beautiful realism combined with gorgeous brushwork is of interest to many of us, so I thought it would be good to find out more about the method he learned from Carolus-Duran.

I found this quote, taken from The Lure of Paris: Nineteenth-Century American Painters and Their French Teachers by H. Barbara Weinberg, very interesting as the painting procedure described is still practiced by painters today, such as Cedric Egeli:

Despite his gifts as a draftsman and his success in the Ecole des Beaux-Arts, there is almost no easel painting by Sargent, from his atelier studies to his most ambitious late portraits and outdoor genre works, that does not disclose an affiliation with the painterly, anti-academic manner of Carolus-Duran. Sargent’s early Blonde Model vividly exemplifies Carolus-Duran’s method, as described by R.A.M. Stevenson, an English painter, and later writer, who also entered the atelier in 1874:

No preparation in colour or monochrome was allowed, but the main planes of the face must be laid directly on the unprepared canvas with a broad brush. These few surfaces – three or four in the forehead, as many in the nose, and so forth – must be studied in shape and place, and particularly in the relative value of light that their various inclinations produce. They were painted quite broadly in even tones of flesh tint, and stood side by side like pieces of a mosaic, without fusion of their adjacent edges. No brushing of the edge of the hair into the face was permitted, no conventional bounding of eyes and features with lines that might deceive the student by their expression into the belief that false structure was truthful . . . you must make a tone for each step of a gradation. Thus, you might never attempt to realize a tone or a passage by some hazardous uncontrollable process.

Also, here is an account of how the studio ran by Carolus-Duran functioned, taken from A Manual of Oil Painting by John Collier:

The model was posed on Monday, always in full light, without shadow effect, and against a strongly-coloured background, which we had to imitate exactly in its relations to the figure. The figure was drawn in in charcoal, then we were allowed to take a sable and strengthen the outline with some dark colour mixed with turpentine, but not to make any preparation, nor put in conventional dark brown shadows.

The palette was set as follows: Black, verte emeraude, raw umber, cobalt, laque ordinaire, brun rouge or light red, yellow ochre, and white (the colors being placed on the palette in this order from left to right).

We were not allowed any small brushes, at any rate not for a long time—many months or years.

On Tuesday Duran came to criticize and correct the drawing, or the laying in of painting if it was sufficiently advanced. We blocked in the curtain first, and then put in the figure or face in big touches like a coarse wooden head hewn with a hatchet; in fact, in a big mosaic, not bothering to soften things down, but to get the right amount of light and the proper colour, attending first to the highest light.

The hair was not smoothed into the flesh at first, but just pasted on in the right tone like a coarse wig; then other touches were placed on the junctions of the big mosaic touches, to model them and make the flesh more supple.

Of course these touches were a gradation between the touches they modelled. All was solid, and there were no gradations by brushing the stuff off the lights gently into the darks or vice versa, because Duran wished us to actually make and match each bit of the tone of the surface. He came again on Friday to criticise and on that day we finished off.

Finally, here are some painting notes attributed to Sargent and recorded by http://gurneyjourney.blogspot.com/2009/02/sargents-painting-notes.html

1. Painting is an interpretation of tone. Colour drawn with a brush.

2. Keep the planes free and simple, drawing a full brush down the whole contour of a cheek.

3. Always paint one thing into another and not side by side until they touch.

4. The thicker your paint—the more your color flows.

5. Simplify, omit all but the most essential elements—values, especially the values. You must clarify the values.

6. The secret of painting is in the half tone of each plane, in economizing the accents and in the handling of the lights.

7. You begin with the middle tones and work up from it . . . so that you deal last with your lightest lights and darkest darks, you avoid false accents.

8. Paint in all the half tones and the generalized passages quite thick.

9. It is impossible for a painter to try to repaint a head where the understructure was wrong.

James Gurney explained his interpretation of the above notes as follows:

For me, one of the keys of understanding Sargent is looking at the painting methods of his teacher Carolus Duran, who had a somewhat unusual method compared to other academic teachers. In a nutshell he tended to block in the tones in discreet mosaic-like patches at first (like a plane head, if you're familiar with those things) and then later in the game you blend the patches into each other

I believe this method gives the best tonal accuracy, which is what he's singing about in #5.

Regarding #7 about starting with the middle tones, I believe he means that right away you want to make your big value statement (or the 'effet' as they called it), but you should reserve your very darkest accents and lightest highlights for final, carefully considered touches.

For more information on this subject, check out this detailed blog post:

http://www.studiorousar.com/2011/03/21/carolus-durans-methods/
And here are a couple of articles from the 1800's that are linked in the above mentioned blog:

Posted by Laurel Alanna McBrine at 8:00 AM 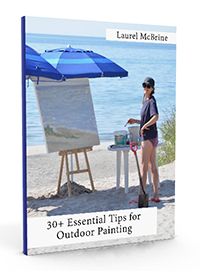 Free Gift For You!
Learn how to paint outdoors with tips for painting success when you subscribe to receive my newsletter!